By Quddus Snyder
In the 1970s, with an eye toward supporting his family and exploiting his rock climbing skills, my father, Channing, decided to pioneer a profession well established in England, though virtually unknown across the Atlantic Ocean in New England.

As the Mt. Washington Valley’s first full service chimney company, the Chimney Man has been delivering reliable service at a reliably affordable price for decades. As a high school student, I first entered the trade as my father’s summer-season apprentice in 1996. I continued in the trade as I put myself through college, and then through graduate school on my way to completing a Ph.D. in International Politics. 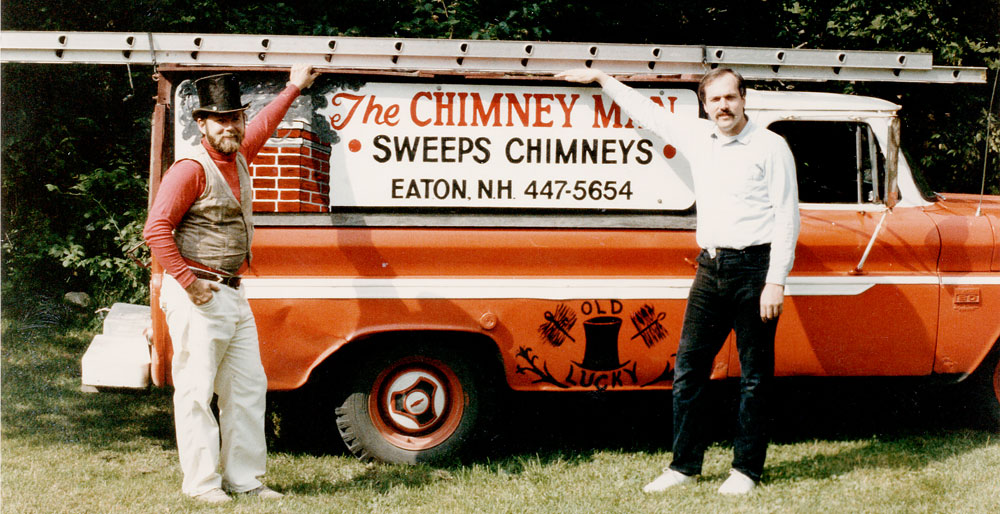 Channing Snyder and Rich Morgan, 1979
Over the years, even as I was corrupting young minds at various institutions including the University of Maryland and Lehigh University during the academic months, I would return home and work alongside my father during the summer.

Since my father’s passing in 2012, I left the ivory tower and my teaching and research post at the University of Maryland, and returned home to assume the reins of the family’s beloved Sweet Clover Farm, as well as the now iconic Chimney Man, LLC—which I affectionately refer to as the family’s blessing and curse.

And I haven’t looked back: I love the mountains and the simplicity of a sweep’s life more than I miss my academic career. With nearly two decades of chimney, and fifteen years of rock climbing experience under my own belt, I now carry on the climbing tradition established by my father four decades ago. My own son Caleb, who has been in a climbing harness since age four, is nineteen and is now part of the Chimney Man team.

Much has changed since our company’s founding. Though over the years we’ve incorporated state-of-the-art tools and techniques, we’ve always stayed true to our ‘Old World’ style and the three core principles that have served us and our customers so well: We deliver the highest quality service, at the best price, with the greatest integrity! And always with a smile!

Jimmy was born in Canberra, Australia, during the great drought of '87 to loving, yet strictly orthodox-Australian parents. As the third born of the family, Jimmy was abandoned deep in the bush of the Budawang Mountains on his third birthday, as dictated by tradition. He was raised into his teenage years by a kindly mob of Eastern Grey kangaroos. When, confused by the wiles of human puberty, he tried to assert his dominance within the mob, he was defeated in a boxing match with the head male and subsequently cast out.

This began his years’ long walkabout the globe, where Jimmy variously scaled small and large cliffs on numerous continents, in his restless search for something—gold, glory, anything but the sun-scorched land he had left behind. Eventually, Jimmy took a big fall, not off of a precipice, but into the arms of a young lady from Massachusetts who promptly brought him to the Northeast where freezing rain, howling winds, black flies, and many other pleasures awaited him. In due course, the two married and have settled down in Fryeburg, ME.

With his adventurous spirit, dapper looks, relentless charm, a decade of rock-climbing & adventure guiding experience—to say nothing of his ability to hop a full nine feet off the ground— Jimmy was exceptionally well suited to the work of a New England chimbly sweep. Happy with heights, ropes, hard work, and just plain being sooty, he has taken to the trade like a Canada Goose to a springtime lawn.
Quddus, The Chimney Man, has impressed me by his willingness to be available for appointments for my real estate clients. He is timely and professional. He is an expert in his field and easily shares his knowledge with the clients. His prices are fair and repair estimates are reasonable! ~Mary-Ann Schmidt